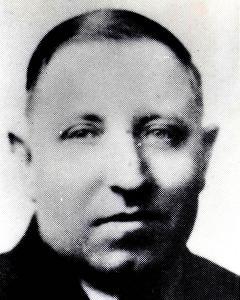 The founder of Chicago’s Society for Human Rights in 1924, the first gay rights organization in the United States, Henry Gerber was born in Bavaria as Joseph Henry Dittmar on June 29, 1892, and arrived at Ellis Island in October, 1913. With members of his family, he moved to Chicago because of its large German population. After working briefly at Montgomery Ward, he was interned as an alien during World War I. He wrote that although this was not right, he did receive three meals a day. From 1920 to 1923 he served with the U.S. Army of Occupation of Germany and during this time, he came into contact with the German homosexual emancipation movement. He subscribed to German homophile magazines and was in contact with Magnus Hirschfeld’s Scientific-Humanitarian Community in Berlin. In 1924, Gerber returned to Chicago and was hired by the post office. Gerber’s return to Chicago was amidst a backdrop of urbanization and an emerging gay subculture.

Following what Gerber had seen in Germany, he felt the need to establish an organization to protect the rights of gays and lesbians. With several friends, Gerber formed an organization which was later incorporated as The Society for Human Rights, a nonprofit corporation in the State of Illinois. The organization published a newsletter, Friendship and Freedom, which was distributed to its small membership.

In July, 1925, the society came to an abrupt end. The wife of one of the co-founders reported her husband, a reputed bisexual, to her social worker who contacted the police. Following a police raid, Gerber and several others were arrested and prosecuted for their deviancy. After three costly trials the case against Gerber was dismissed. Gerber lost his entire life savings defending himself and was fired from his job at the post office for conduct unbecoming a postal worker.

After his ordeal, Gerber moved to New York City where he reenlisted in the U.S. Army and served for 17 years. During the 1930s he managed a personal correspondence club and wrote articles in gay publications under a pseudonym. The correspondence club became a national communications network for gay men. In the 1940s, Gerber exchanged a number of letters with Manuel Boyfrank of California. Boyfrank was enthusiastic about organizing to combat homosexual oppression. Gerber offered his assistance, but refused to risk his job again. He continued his assistance through personal correspondence and numerous articles.

On December 31, 1972, Gerber died at the U.S. Soldiers’ and Airmen’s Home in Washington, D.C., at the age of 80. He lived to see the Stonewall Rebellion and the start of a new era of activist gay and lesbian liberation organizations.