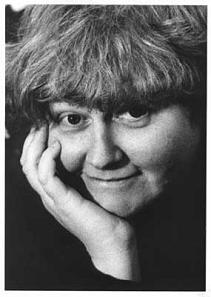 For almost two decades, Jorjet Harper has been a journalist and columnist, commenting on a panorama of gay- and lesbian – orientated topics in publications throughout the country. In addition, her “Lesbomania” columns and performances have tackled homophobia and built community through humor. More recently, she has been a speaker and educator on lesbian and gay issues in history.

Harper began writing for Chicago’s lesbian-feminist newsletter Blazing Star shortly after moving here from her native New York City in 1979. When Blazing Star was incorporated into GayLife during Grant Ford’s tenure as the latter’s founding publisher, she became co-editor of GayLife’s “women’s section.” After several years as a freelancer writing arts features and reviews for GayLife, she joined the original staff of Windy City Times as typesetter, proofreader, and contributing writer, later becoming the paper’s books editor. Still later, Harper was on the founding staff of Outlines, serving as entertainment editor from 1987 to 1990. She has also contributed to Outlines and Nightlines as writer and photographer and was a regular columnist and contributor for the influential Chicago-based national lesbian magazine Hot Wire: The Journal of Women’s Music and Culture during its 10-year history.

The growth of lesbian identity, gay and lesbian culture in a wider community context, and the illogic of homophobia have always been Harper’s main themes. Through syndication of her writings to publishers in other cities, she has helped to forge ongoing links between Chicagoans and other gay and lesbian communities nationwide. From her Chicago home base, Harper has written sparkling commentary on a panorama of gay-related subjects. Her 1989 cover story, “Lesbians in the Girl Scouts,” appeared in the national magazine OutWeek and was the first article ever written on that previously silenced subject. She has also been published in mainstream newspapers and general-audience cultural publications.

Perhaps Harper’s most influential contribution has been through the community-building and healing power of her humor. In 1990, she began writing a humor column, “Lesbomania”—first in Nightlines, then in Outlines, and now appearing also in Baltimore, Philadelphia, and Miami—which aims to serve positive social change and the struggle against homophobia. Two books of her columns have been published; a third, as well as a French edition of her second, is due in 1999; and she has contributed to anthologies of lesbian writing and women’s humor.

Though she considers herself primarily a writer rather than performer, Harper performed staged versions of “Lesbomania” that include slides of her comic artwork at several Chicago venues. She has also been on programs at Women & Children First bookstore, has performed at New York’s Gay and Lesbian Community Center, and has given talks and readings across the United States and Europe. In recent years, she has become a speaker and educator on lesbian and gay issues in the wider community and has given talks on Chicago gay and lesbian history for college students. She is a strong believer in strengthening links between lesbian and gay Chicagoans and the international lesbian and gay movement. (Please note: this information has not been updated since the time of the member’s induction).