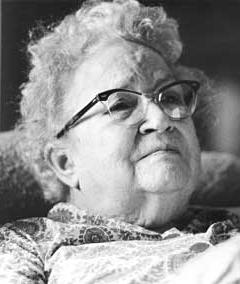 Born in 1895, Jeannette Howard Foster was and educator, librarian, translator, poet, scholar, and author of the first critical study of lesbian literature, ‘Sex Variant Women in Literature’ (1956). She was also the first librarian of Dr. Alfred Kinsey’s Institute for Sex Research, and she influenced generations of librarians and gay lesbian literary figures. She died in 1981.

Dr. Foster was an educator, librarian, translator, poet, scholar, and author of the first critical study of lesbian literature, “Sex Variant Women in Literature: A Historical and Quantitative Survey” (1956), which was her chief work and became the keystone for scholarship in the field with the campus eruption of women’s studies in the 1970s. Foster was also Dr. Alfred Kinsey’s first librarian at the Institute for Sex Research (1948–52).

As a University of Chicago undergraduate in 1914, Foster suffered what might today be considered a nervous breakdown after she realized that she loved another woman. In her book’s introduction, Foster recounts a dormitory meeting that considered expelling two women students who had locked themselves in their room, engendering a “morals” issue. These events triggered her lifelong search in professional literature and belles lettres for an understanding of female homosexuality.

After 18 months of recovery, Foster entered the all-female Rockford College, from which she received a chemistry degree in 1918. Years later, she received her Ph.D. degree from the University of Chicago (1935), where she taught undergraduate English and had earlier received degrees of A.A. (1914) and A.M. in literature (1922). In 1932, she also earned a bachelor’s degree in library science from Emory University.

Her work as a teacher of library science influenced generations of librarians and nonprofessionals. Among the latter is Barbara Gittings, who pioneered the Task Force on Gay Liberation within the Chicago-based American Library Association. Foster’s students included the late Joseph Gregg, who became a librarian at the University of Chicago and Northeastern Illinois University and eventually was founding librarian of Chicago’s Gerber/Hart Library and Archives. Gregg attributed his Gerber/Hart activism to Foster, and Foster’s bibliography is said to have been used by the library when securing its first major grant.

Foster was a friend of the late lesbian novelist Valerie Taylor, who introduced Foster to Chicago literary activist Marie Kuda. A direct result of the meeting was the founding by Taylor and Kuda of the nation’s first lesbian writers conferences. The initial conference, in 1974, was dedicated by Taylor to Foster and to her influence on the next generation of writers. The conference keynoter was Barbara Grier, a Naiad Press founder and former editor of the nation’s first lesbian magazine, The Ladder. Grier acknowledged her indebtedness to Foster and noted that Foster had contributed reviews, criticism, and fiction to that magazine over 12 years under at least three names.

Foster died in 1981. A true pioneer, she created a body of work where nothing similar had existed.