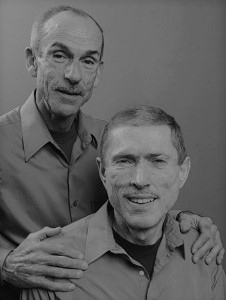 Their life partnership flourished for 39 years and five weeks, as did their ongoing business partnership. As openly gay urban pioneers, they helped revitalize Chicago’s Sheridan Park neighborhood by buying and restoring properties and by activity in neighborhood associations. Their work was recognized repeatedly; in 1986, for example, four Sheridan Park buildings the partners had restored were cited as examples of historically significant structures in a petition for the neighborhood’s designation as a National Historic Landmark District.

Joe La Pat (1943–2008), was inducted in 2008. Entrepreneur, for his generosity and wide-ranging support for Chicago’s LGBT community, including early key support for Proud to Run, Strike Against AIDS, Chicago House, Gay Games VII — especially for international athletes who participated — and the Center on Halsted.

Richard M. Uyvari, was inducted 2006. Athlete, real-estate investor, and philanthropist, for 27 years of dedicated service to the LGBT sports community as a bowler, tournament director, leader, fundraiser, and sponsor.

Uyvari and his life partner of 37 years, Joe La Pat, were honored at a 2006 Gay Games celebration for their philanthropy. They sponsored the lesbian soccer team from Soweto, South Africa, as well as other athletes from around the world through large donations to the Gay Games VII Outreach Scholarship Fund. They have also committed to sponsor the 2010 Soweto team for Gay Games VIII in Cologne.